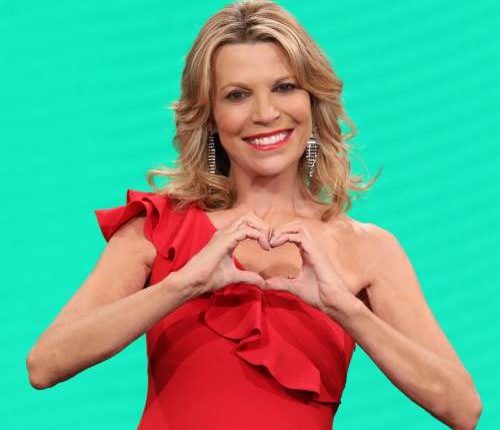 If you watch television, you must have heard the name of Vanna White. She is one of the most famous television celebrities in America as she has been hosting the very popular show; Wheel of Fortune since the year 1982. She is also a successful professional model and has modeled for several clothing lines and top brands in the industry. She has been hosting the Wheel of Fortune for more than 40 years now and has become an integral part of it. She is also a Guinness World record holder for the most frequent television clapper, and she achieves that in 1992.

Vanna White’s full name is Vanna Marie White, and she took birth on February 18, 1957, in Horry Country, which is situated in South Carolina, near North Myrtle Beach. Her father’s name is Miguel Angel Rosich, and her mother’s name is Joan Marie Nicholas. When she was a toddler, her parent got divorced, and she spent her childhood with her mother and stepfather, Herbert White Jr. She was raised on North Myrtle Beach and was given the name of her stepfather, who was a real estate broker.

After completing her higher education, she shifted to Atlantan, Georgia, and started attending Atlanta School of Fashion and Design. She went to Los Angeles to start her acting career in the year 1979 but returned in 1980 as her mother was offering from cancer.

Vanna took part in the Miss Georgia USA in 1978 before she became a popular TV personality. She appeared in the game show on June 20, 1980, for the first time as a contestant. In the year 1980, she got a role in a film which is released in June 1990 and titled; Gypsy Angels. She also appeared in several TV shows such as Super Mario Bros, The King of Queens, Full House, and many more. She also took several backstage interviews at WrestleMania IV. In 1987, she launched her autobiography named ‘Vanna Speaks’, and it was declared a best seller.

Wheel of Fortune was earlier hosted by Susan Stafford, but she left the show in October 1982, and Vanna was selected as a substitute for hosting the show. In December, she became the permanent host for the show and never looked back. She also holds the record for most frequent clapper, which is achieved while hosting the show.

Vanna is a Christian as she is baptized. She dated John Gibson in the 1980s, and they both got engaged. Unfortunately, John dies in a plane crash in the year 1986. So, in 1990 White married George Santo Pietro, who was a restaurant owner. In 1992, she announced her pregnancy in the show by went through a miscarriage afterward. She gave birth to her first child two years later, in 1994, and named him Nicholas. In 1997, the couple got a girl child and named her Giovanna.

If we talk about the Net Worth of the popular TV host, it is a whopping $70 million.